Paterson has a long tradition in sports excellence, particularly at Hinchliffe stadium. Hinchliffe has a permanent place in American sports, and social history as one of a handful of extant stadiums home to professional black sports during the so-called “Jim Crow” era. 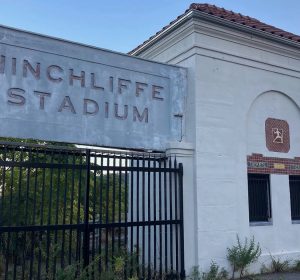 When baseball was an indisputable game of greats, Hinchliffe featured some of the greatest ballplayers in America, players who ironically had no access to the major leagues. Hinchcliffe Stadium was the home to the New York Black Yankees for over a decade and the Colored Championship of the Nation in 1933. Baseball legends such as Satchel Paige, Josh Gibson, and Hall-of-Famer and Paterson-native Larry Doby played baseball at Hinchcliffe.

Larry Doby’s baseball career started on the Eastside High School team that played at the stadium. Major League Baseball excluded players of color in those days, and the Negro Leagues recruited athletes of unparalleled excellence. A scout for the Newark Eagles saw Doby play at Hinchliffe, launching his professional career. One month after Jackie Robinson broke the color barrier and joined the Brooklyn Dodgers in the National League, the Cleveland Indians signed Larry Doby. Larry Doby remained proud of his Paterson roots and returned frequently to visit family and friends for his entire life.

The stadium is a grand concrete oval planted majestically above the Great Falls,

which was placed on the State and National Registers of Historic Places in 2004. Based in part on a plan by the distinguished Olmsted Brothers firm, Hinchcliffe overlooks the Passaic River at a location so close to the Great Falls that the rushing waters can be heard from the stadium’s home plate.

Paterson native Lou Costello went to sporting events at Hinchliffe Stadium and then wrote the famous “Who’s on First?” routine that Larry King calls “the funniest sketch in the history of comedy teams in show business.” In addition to performances throughout the country, “Who’s on First?” is forever preserved in the Abbott and Costello film “The Naughty Nineties.” The film shows the Paterson Silk Sox as the home team on the scoreboard, and just beyond the movie set stadium are factories and other buildings resembling those of the Great Falls Historic District around Hinchcliffe Stadium.

The “Who’s on First?” routine became a national phenomenon in the 1940s and 1950s, and its significance continues to the present day. As Jerry Seinfeld writes, “Abbott and Costello were the guys who made me fall in love with the idea of being funny…They were the roots of virtually every contemporary comedian working.” 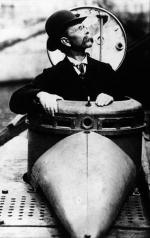 John Philip Holland built the first submarine in Paterson and testing his invention in the Passaic River.